Rubattorno: a brand that takes its name from an historic street of Montalbano’s area

The winery covers an area of 18 hectares and it is a reality that has its roots in the 18th century, when the farm belonged to the Counts Arrighini. The name “Rubattorno” has even an older origin and it comes from the alternation of historical and social events. The street “Rubattorno”, in fact, was the place where the robbers, in the 13th century, lurked to make raids among the flocks of sheep, forced to go by there to reach the pastures of Montalbano.

Therefore the name “Rubattorno”, where still today lies the company and from which the winery takes its name, indicates a street and a small hamlet of houses in the town of Quarrata, a city widely known internationally for furniture and plant nurseries. Located in the beautiful Tuscan landscape of Montalbano, at 60 metres above sea level, the winery is composed of a main villa, entirely surrounded by vineyards and an olive grove. The Winery is located within a restricted and delimited area of ​​Chianti DOCG: in fact it is located in the area of Chianti Montalbano DOCG, a Chianti subzone. The wines arise from the classical vines of this exclusive terroir, that is from the Trebbiano Toscano, Sangiovese, Canaiolo nero and Colorino grapes.

There where the Prince is Chianti Montalbano D.O.C.G.

The Winery Rubattorno aims to make known the brand Chianti Montalbano, area in which in 13th century was produced wine to supply the whole Italy. Just to let know this area and the wines which is able to produce, the winery decided to make wines under the denomination “Chianti Montalbano DOCG”. 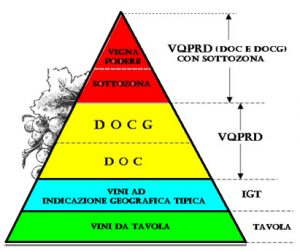 In fact according to the quality pyramid of wine, the wine production under such denomination, being one of the subzones of Chianti DOCG, is regulated by a specific production policy document which provides stricter and more rigid rules. Chianti Montalbano DOCG, being a denomination of a limited and exclusive area of Chianti DOCG, by its nature, places itself at the top of quality pyramid of wine, because in this area are produced high value and high quality wines.
Therefore among the wines of the winery, the Prince is certainly the Chianti Montalbano Riserva D.O.C.G., which obtained, in 2016, 2 Stars at the Wine Fair Exhibition of London.

The wine production of the winery is wide and varied:

Rubattorno: the Chianti you don’t expect!